The "Big Four" oligopoly of giant accountancy firms is again lobbying hard to protect its position and prevent some sort of break-up restoring a nearly-as-Big Five or maybe six.

Their past efforts have been successful, and their new impetus follows damning comments from leading MPs on the various Parliamentary committees investigating the collapse of Carillion and the role of the Big Four firms. Their ire is particularly high as the Big Four billed Carillion, its pension schemes and the Government £71 million since 2008 relating to Carillion: yet failed to notice anything was wrong.

With widespread and continuing condemnation of the big audit oligopoly from Parliament (over 97% of FTSE 350 companies are audited by the Big Four), there are obvious furious attempts going on behind the scenes to protect the status quo, and judging by press coverage in recent days it bearing fruit... at least with some senior journalists.

Firstly in Friday's Evening Standard  business writer Jim Armitage trotted out various Big Four arguments and then concluded by saying "It may sound like the Big Four lobbyists have got to me, but they haven’t. These are the views of Sacha Romanovitch, head of Grant Thornton, the number five accountant. "

Pretty naive! They have, you just didn't realise it Jim!

A cynic might argue that Grant Thornton realises that if the Big Four are broken up they will still continue to fail to win FTSE 350 audits (it was reported in March that they have even given up trying), while the newly created firms will also take market share from GT in its core mid-market area

... So Grant Thornton (and BDO) have as much interest in the status quo as their larger competitors!

A good start for the Big Four's efforts, and followed on Saturday by Iain Dey in The Times whose editorial showed he too had swallowed a whole load of too saying prominently

"The systems that could keep pace with ever-more multinational clients.... blah blah."re are any number of reasons for breaking up the Big Four accounting firms. Yet I struggle to see that Carillion would have been any less likely to go bust had there been more firms competing to audit its books.....the consolidation among auditors was driven by a need to invest in

So, a couple of good lessons for mounting a read-guard campaign to protect yourself. Firstly, get your arguments presented by other people. In this case, besides the media, they have notably used one of their competitors as a surprise surrogate to add credibility.

Secondly, shift the goal posts to frame it around something that is stronger ground for you. In this case shifting the argument away from "the Big Four is a harmful oligopoly and Carillion highlights this" to "it is a big job only we have the scale and resources to do it... and Artificial Intelligence magic wand will shortly sort out such problems anyway".

Our impending webinar will be looking in much more detail at how to launch an aggressive campaign, and also how to defend against one if you are on the receiving end. Full details are available here. 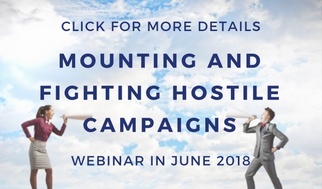