Each week dozens of business books are launched:  around 11,000 each year, according to an estimate in BusinessWeek.  Most secure little press interest, while those that do typically are by already well-known authors, prominent business figures (e.g. Jack Welsh) or have generated controversy (such as colourful “insider” stories from former Goldman Sachs bankers).

By contrast, Kelso Consulting helped ensure 'The Commando Way', the book by management consultancy CEO Damian McKinney, to be featured in a number of lead articles in such publications as the Wall Street Journal, The Financial Times and the Sunday Telegraph at the time of its launch. Strong coverage continues to be generated for the book many months after it was first published.

Publicity for the book was handled jointly by Kelso Consulting (the Public Relations advisers to McKinney Rogers) and the publisher (LID Publising); with Kelso Consulting focusing on a London launch event and the very top tier media (which we specialise in targeting).

The initial print run was sold out within the first month and, within two months, it was already in its third re-print because of strong demand.

The exceptionally strong level of coverage for the book also persuaded W H Smith to stock it, particularly at airport kiosks (the book is designed for senior executives to be able to read it on one flight) and led to substantial interest in foreign language versions, when the publisher attended the Frankfurt book fair (the main publishing trade event). 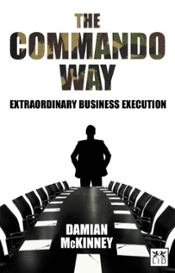 Comments from the Publisher & PR team

Martin Liu, CEO of LID Publishing, the book’s publishers said:  “Even within two months of the Commando Way’s publication, its coverage, both in terms of volume and prominence, was quite exceptional.  Kelso Consulting and our publicist worked as a great team and I can say from very extensive experience that the coverage Kelso delivered in The Wall Street Journal, The Financial Times and elsewhere was amazing, particularly for a new book by a first time author”.

“A lot of effort goes into creating a book, and it is a hugely valuable thought leadership asset for a business – it really puts the author head and shoulders above their competitors.  We were determined to get really strong initial coverage and to keep re-using the book to get the maximum value from it for McKinney Rogers in terms of coverage, prestige and business impact.  While creating a book is not easy, it is also not as difficult as some suppose, and I would strongly recommend businesses consider it as part of their thought leadership programme.”