Lessons for every leader from Thomas Cook's PR disaster

A while ago I penned a white paper entitled "Why some companies turn a crisis into a PR disaster .... and how not to be one of them" based on then recent cases such as Toyota.


The main point was that such disasters typically don't come out of the blue and the effective PR tactics for handling them are well known.

Yet experienced and competent CEOs and their management teams had been able to create a PR disaster of far greater magnitude through inept handling of the communications issues.

I revisited the paper in the light of the recent sad case involving Thomas Cook and its handling of the publicity around the recent inquest into the deaths of two children while holidaying in Corfu a few years ago. I won't be changing the white paper as Thomas Cook also exhibited all the wrong-headed management thinking it warns against.

While you may argue that Thomas Cook's PR tactics were poor, the real question is why did it pursue poor tactics initially when the right approach should have been clear (and indeed was belated adopted by them).

The paper highlights the pressure teams come under during a crisis, and the problems that occur when this is combined with such psychological traits as group-think, our "self-serving bias" (dismissal of information and sources that do not support out point of view),

and the inability of people to change their minds once they are made up.

Of course, these issues are not unique to crisis situations - they affect us throughout every day and often are very helpful, but they become more of a problem as the stakes get higher.

Particular lessons for lawyers from the paper include:

Download our white paper on the psychology that drives businesses to turn crises into PR disasters by clicking on the image below: 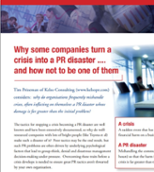