There is no doubt winning one of the credible legal industry awards can be wonderful for boosting staff morale while also raising your law firm’s reputation.

While larger firms gain armfuls of them each year, for smaller and regional firms, as well as suppliers to law firms, they are a huge credibility statement too – demonstrating that the work they do is every bit as notable as their larger counterparts.

As well as awards for private practice and in-house legal departments, there are gongs for legal suppliers and support ranging from legal tech companies to HR managers.

Legal tech and the market disruption it has forced on the profession is the hot topic of the moment. Technology is changing the business of law but communicating how your technology has helped set trends and why it should be worthy of an industry award can be a challenge.

Yet the kudos that comes with an industry award cannot be underestimated for helping to build your credibility within the profession. An award demonstrates confidence in your product from an independent source, something that could be attractive to conservative lawyers who like to stick to suppliers they know best.

It can be a tricky time for legal marketers who are under pressure from lawyers to write entries that win while having to navigate some strict entry criteria set down by event organisers.

In my time at The Lawyer I sat on the awards judging panel several times, working through reams of entries to whittle it down to the final three. Submissions were varied, from the largest household names to local firms working on local projects.

It is not a task to be taken lightly. Some categories could have 30-plus entries and it would be the job of the news desk to research each one to ensure its authenticity and gauge whether it was good enough to make the shortlist.

Desperate to win, one firm – which no longer exists – sent in box after box of supporting material; not that it did them much good in the end.

Another in-house lawyer, no doubt looking for a new job, asked his lawyer mates to call and email in support of his submission. He didn’t win.

One team submitted a case they had worked on jointly but omitted to name the other firm even though the involvement of both teams was a matter of public record. Firstly, it highlighted the state of relations between the firms, but it was also misleading so didn’t make the shortlist!

Suppliers would baffle and bamboozle us with details of the latest innovation without properly communicating its impact on the profession. If the submission could not be understood it would not make the cut.

To me, those that stood out were the submissions that showed law can make a real difference – either locally, nationally or internationally. The same goes for suppliers. Case management technology may not seem interesting on first look, but if you can show how it is reducing costs for litigants then you have the basis for an entry.

The judging panel, while highly skilled and knowledgeable in their daytime jobs, might have a limited understanding of the field they are expected to assess.

Often deciphering the order of the final three – and ultimately, the winner – would involve a lengthy debate, resolved by a final vote..

Whether it is The Lawyer Awards, the Financial Times Innovative Lawyers, the Law Society Excellence Awards, The British Legal Awards or something on a local level such as the Devon and Somerset Legal Awards, a well-written submission can be the difference between first place and no place.

Having sat on the panel and read hundreds of submissions, here are some tips that will help put your team on a winning path:

It is imperative that your firm has something to say in its award submission – something that is worth recognising at an industry event. If lawyers are putting pressure on you to enter their team just because they have worked hard this year, resist.

It is worthwhile playing the long game. You may have a better chance of winning two or three years down the line when the team has achieved the targets it has worked hard to put in place.

Pay careful attention to the award criteria and stay within its specifications. It may be that the judging panel is told to disregard anything that is not within the rules, in which case it has been a total waste of time for you to even include it.

Be prepared to provide evidence

Consider what evidence you have in support of your submission, also whether you are able to share it with the judging panel. Client confidentiality might be a concern but there are ways to demonstrate the impact of the work without breaking the client rules.

Lawyers working on billion-pound deals or thrashing it out in Supreme Court will have evidence of the work they have done, but how does this make you stand out from the crowd? How has the project impacted the client and their way of working, and has it changed working patterns at the firm? Has it had a broader effect – such as changing the law?

It is important to manage lawyer expectations. Too often they demand recognition for simply carrying on as before and improving revenues. Legal trade press and award judges want to see something new and fresh, for want of a better word, they need an angle.

Only by doing this can they continue to push up the calibre of entries and ensure the sustainability of the event long into the future – after all this is where many trade titles make their money.

If you have secured a major win for a client, one that demands recognition, then it is worthwhile asking them to support your submission.

You might want a quote on the entry. Better still include the contact details of the referee and make sure they are available to talk to the judging panel – and that they stay on message.

Most judging panels want to see a team effort demonstrated in the award entry. It may not be necessary to include the name of every paralegal that worked on the project, but if the team has worked strategically with other departments, for instance with support services, then include that in the detail. You may want to highlight lawyers who have done exceptional work and in doing so, raise their profile with the panel. Remember anyone who is mentioned by name may be contacted for comment about the submission.

Build relations all year round

While low profile projects can win awards, there is plenty to be said for raising the profile of your project so it whips up some industry buzz ahead of entering.  Industry awards tend to go to the

trendsetters, those that have been open about the work they have been doing all year round – not just during awards season.

Anyone cited on the submission – whether that is the managing partner or company chief executive - must be open to contact with the judging panel, and they should be willing to talk about the project.

Legal technology is changing the way the profession works and there are many exciting new companies working with firms to change how they do business. No longer is it “innovative” to try something new, this is now the norm. Expecting the judging panel to recognise your company just because it has been “innovative” and has some clever technology is a forlorn hope.

Instead, focus your efforts on communicating your message effectively, backed up with tons of relevant supporting evidence and details of how your business has changed the business of law.

Be specific and factual with lots of evidence, not bland marketing-speak.  Judges want to see the impact on real law firms and clients.

Finally, award winners must be decent people who are ethical and compliant.

No event wants to hand an award to someone who could be arrested the next day or subject to lots of #metoo tweets for groping.

Award events can become boozy affairs, but pinching reporters’ bum (happened) or spilling red wine over the editor's dress (happened) is not going to win you fans. Ensure lawyers stay professional and courteous, but, above all, judges don't want to give awards to an asshole. 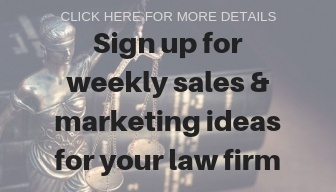