PR for newbies, what you really need to know to ensure a successful first encounter with the media

Forget about press release “how to's” and guides on press list preparation, this article from Kelso Consulting (which first appeared in Professional Marketing magazine) sets out what you really need to know to prepare newbies for their first press encounter, as well as anticipate the questions they will have for you and the hidden fears they harbor.

You've heard about the power of media, maybe your competitors are getting great coverage or perhaps you have a partner with a big ego who has lots of press coverage. Either way, you have been tasked with getting press coverage for your practice but neither you nor the partners have done it before.

That's not a problem, everyone must start somewhere.  But many spokespeople and marketing advisors approach it with fundamental misunderstandings and unrealistic expectations, which at the very least lead to missed opportunities and often mess the whole thing up.

Here we deal with the way how most firms will encounter the media, with the firm proactively seeking coverage to build their brand for the first time.  I won’t be tackling handling a crisis when your reputation is at stake from hostile media interest… that’s too big a subject, but there is some good stuff on my website at www.kelsopr.com

I always start on the basis that most people have never dealt with the media, so their views on it are likely to be influenced by what they have seen on the world’s most powerful medium, television. When press events are shown on the TV news you get packed press conferences full of journalists, so it is natural to expect this is the norm. It isn’t!  Far from it.

Similarly, everyone has heard about press releases, so it’s natural to think these are the main way, perhaps the only way, to communicate with journalists.

Suffice to say, that the small number of press conferences that are on the TV are for something massively important, and will either involve senior government ministers, heads of state or very controversial figures, or they will be around major news events like murder enquiries and that sort of thing. Professional firms rarely get involved in this sort of hard news.

.... Download the rest of the article by clicking on the link below... 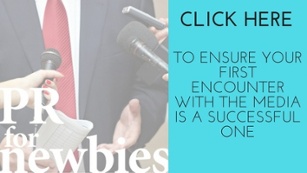